(I am no expert. This is info that I read recently and want to share what I think I learned.)

It is a chronic neurological disorder that typically begins in childhood. It can affect planning of movements and co-ordination as a result of brain messages not being accurately transmitted to the body.

Impairments can interfere with activities of daily living. It is a motor planning disability and can also affect speech.

It is, more or less, defined as difficulty with movement.

Dyspraxia is often present in people with autism. It presents very early in children when they’re first struggling with fine motor skills and gross motor skills.

From what I read, because it’s common in young kids with autism, it often gets a late diagnosis.

Or, dyspraxia gets a diagnosis and autism doesn’t get the diagnosis until later on.

Therefore, they are often diagnosed separately.

How can they be different?

In general, autism is a disorder of social skills and communication (yes, other things, too).

However, dyspraxia (generally) is a disorder of motor planning only.

Both can lead to awkwardness in social situations.

In addition, both can involve sensitivities to temperature or loud sounds.

And, both can impair a child’s development.

Furthermore, toss in the fact that all of the above can lead to an increase in cases of bullying.

What about my son?

I do remember a six-month period when my son saw a physical therapist for what was diagnosed as a slight hitch in his gait. He was roughly five years old.

The therapy needed to correct the issue wasn’t long because it was (apparently) an easy issue to correct.

Did the issue have anything to do with dyspraxia?

I don’t think so.

My son was always late in his development. Late in talking and walking, etc.

However, I believe this short period of time was recommended to correct an issue that may have developed into a larger problem as he got older, but wasn’t necessarily autism-related.

To this day, my son has fairly good body movement. I jokingly call him a “movement kid” because he needs movement breaks. He’s fidgety and squirmy and movement helps to regulate his body.

Still, I wouldn’t call him “athletic” because he doesn’t have that type of coordination.

What happened further down the road?

My son did not have to deal with another diagnosis of dyspraxia.

We haven’t seen any issues in that regard.

In conclusion, I get how the two things, autism and dyspraxia, can be related.

Individuals with autism struggle with motor planning and dyspraxia is all about a deficit in that area.

It all adds to challenges for these individuals.

You can also find this autism blog on ModernMom.com

View all posts by Kimberly Kaplan

This site uses Akismet to reduce spam. Learn how your comment data is processed. 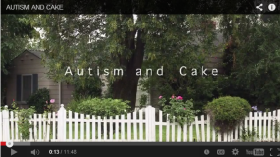